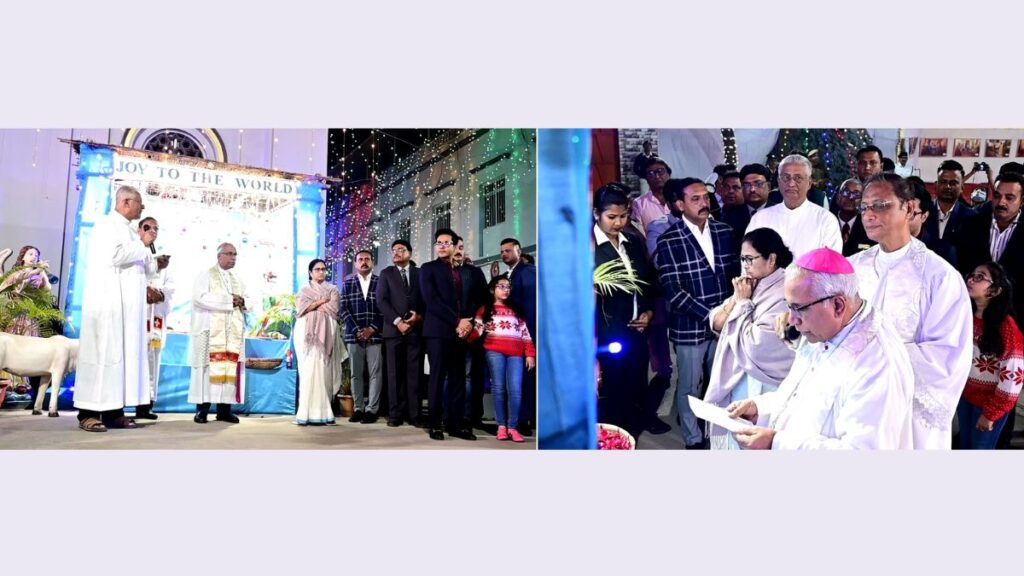 Chief Minister Mamata Banerjee, at the mid-night mass at Cathedral of The Most Holy Rosary in Burrabazar, Kolkata, with Archbishop His Excellency Thomas D’Souza, Abhisek Banerjee, MP, Fr Franklin Menzes, ProVicar of the Cathedral and members of Don Bosco Alumni, Pramode Agarwal and Subrata Ganguly and others. Kolkata Police Commissioner, Vineet Goyal was also present at the X-mas Eve function. Chief Minister inaugurated a crib set and special exhibition on the life of Lord Jesus curated by Church Art.

The exhibits at the special exhibition, created by Church Art of Kolkata, displayed in front of the Cathedral of the Most Holy Rosary, are most apt as 20 panels narrate the story of the announcement of the Birth of Jesus till his Resurrection and the glorification of his Mother Mary.

“As in the past years, this year too, as Christians heed to the call of green Christmas, tradition recalls a Catholic Saint who returned to nature by promoting “presepio vivente” – a living Crib – depiction of the birth of Jesus as described in the gospels of Matthew and Luke,” said Fr Franklin Menezes, Pro-Vicar of The Cathedral of the Most Holy Rosary, Burrabazar. The Cathedral was founded in 1799.

“The set of twenty pictures at the exhibition is a panoramic representation of the various turning points in Lord Jesus’ life considered sacred like birth, baptism, transfiguration, eucharist, crucifixion, resurrection, ascension, descent, assumption, coronation and so on,” said Mr Subrata Ganguly, curator of the exhibition and founder of creative arts firm Church Art.

“Nativity scenes exhibit figures representing the infant Jesus, his mother Mary, and Joseph. Other characters from the nativity story, such as shepherds, the Magi, and angels, may be displayed near the manger,” said Fr Dominic Gomes, Vicar General, Archdiocese of Calcutta, while commenting on the crib set at the Cathedral.

The Vatican has displayed a scene in St. Peter’s Square near its Christmas tree since 1982, and the Pope has blessed the managers of children assembled in St. Peter’s Square for a special ceremony for many years. In 2015, the first-ever crib set depicting Jesus’ birth from India, designed by the Kolkata-based organization Church Art, was added to the International Nativity Museum of Bethlehem’s collection of 223 nativity representations from over 93 countries.

Previous articleASPEE Group MD Shri. Kiranbhai Patel talks about Agricultural activities at Regional Meeting of IAUA
Next articleAs 2047 hits stands, Arindam Chaudhuri proclaims his book, ‘2047’ will make the job of Finance Ministers and PMs easier for many years to come