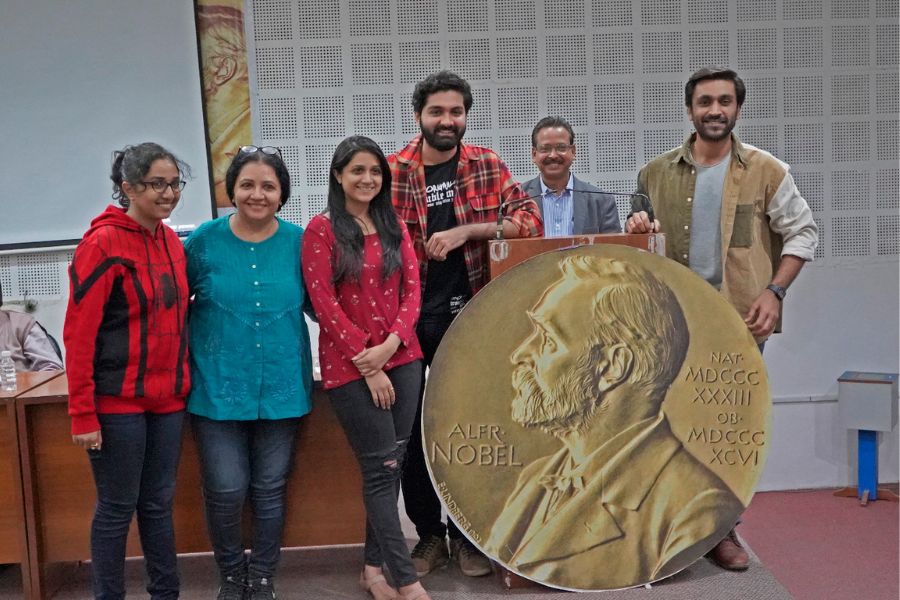 December 12: A special outreach program was organized at Science City and each Regional Science Center by Gujcost, working under the Department of Science and Technology of Gujarat State, to spread enthusiasm and information about the Nobel Prize amongst the youth. In this program, the importance of this year’s Nobel Prize was explained in simple language by experts from Physics, Physiology/Medicine, and Chemistry. Simultaneously, live streaming of the award ceremony held in Stockholm, Sweden, was also done.

Live to the stream of the Nobel Prize ceremony held in Stockholm at 8:15 pm was done.

To increase the enthusiasm of the students in the program, well-known stars of the Gujarati Movie’ AumMangalamSinglem” Ms. Arohi Patel, Tatsat Munshi, and Aarti Patel were also present. They also visited Aquatic Gallery.

Every year on 10 Dec, the anniversary of Alfred Nobel’s death, an award ceremony is held in Stockholm to award the new laureates. In which the names of this year’s Nobel Prize winners are as follows.

If you have any objection to this press release content, kindly contact pr.error.rectification[at]gmail.com to notify us. We will respond and rectify the situation in the next 24 hours

Previous articleThe 7th edition of Finbridge Expo will be held in Mumbai on the 17th and 18th of December 2022
Next articleFuel Your Prospecting Needs With Freshly Brewed Data From Leadzen.ai!

The passion and artistry of Shailesh Ghanchi in the world of Rajasthan.