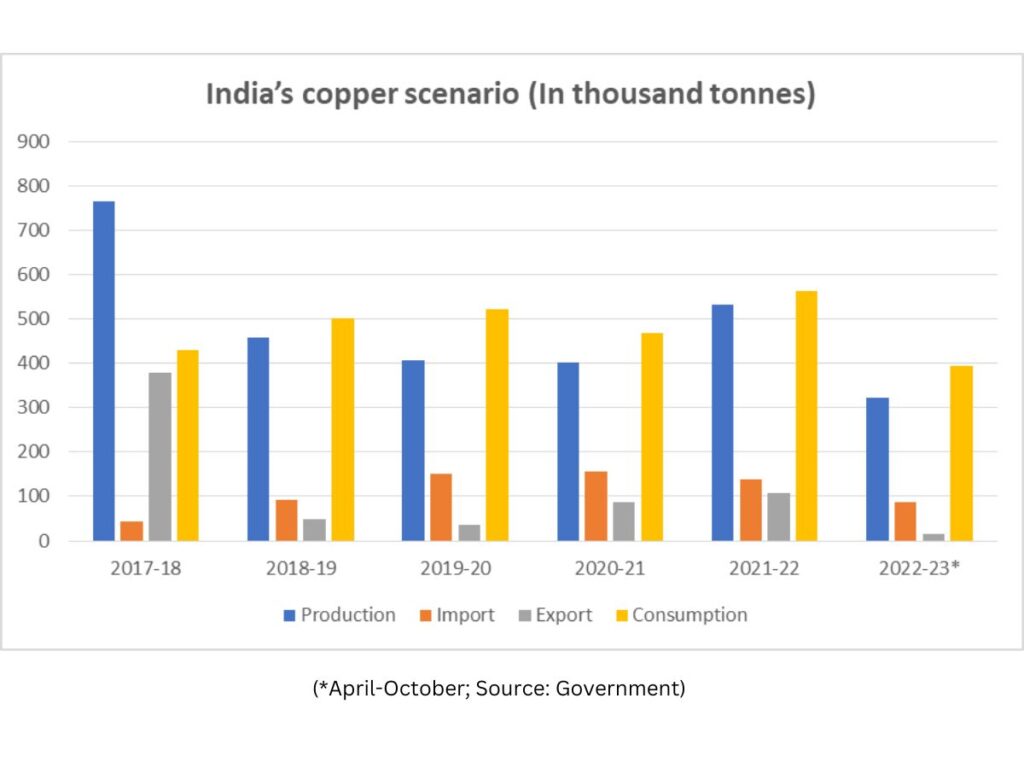 New Delhi (India), January 12: A net copper exporter since the early 2000s, India is likely to remain a net importer of the metal, now being called as “new oil”, for the fifth year in row in 2022-23 fiscal as well, hinted government data. The status reversal happened coinciding with the closure of Sterlite Copper’s four lakh tonnes per annum (LTPA) smelter in Tamil Nadu in May 2018.

“Domestic copper production fell significantly from FY2019 onwards as a result of shutdown of the Sterlite Copper plant in Tuticorin. Lower refined production created a huge deficit in the domestic copper market, resulting in large imports for fifth year in a row. Given the healthy copper demand outlook in the domestic market, the deficit situation is unlikely to improve in the near term,” Jayanta Roy, Senior Vice-president and Group Head, Corporate Sector Ratings, ICRA said.

While production steadily fell since Sterlite’s unit closure and the trend continued till FY21, there was a rise in production last fiscal but it was well short of the 2017-18 level. Consumption, on the other hand, has been on the upswing, thanks largely to demand from electrical, electronics, infrastructure and electric vehicle segments.

Analysts believe that given the government’s thrust on infrastructure and rapid offtake of the electric vehicles, domestic demand for copper would go up by 10-11% in the next two years. This would make India to rely more on imports unless domestic production is ramped up.

A parliamentary standing committee, headed by BJP MP Rakesh Singh, in a recent report, recommended that the government prepares a specific action plan to promote indigenous copper industry and some measures be taken to reduce dependency on import of refined copper or copper scrap.